Ruskin Bond’s ‘The Wind On Haunted Hill’ on ZEE5 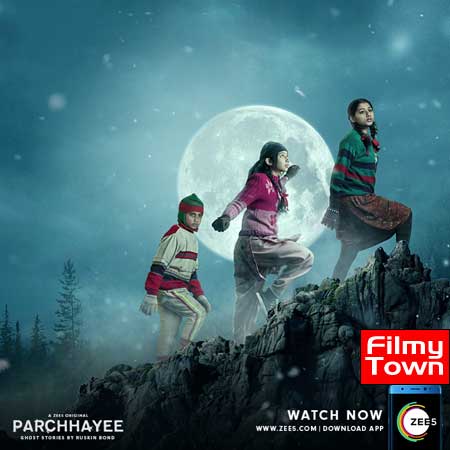 On a Haunted Hill, swept by howling winds blowing down from the Himalayan snows, stands the ruins of a deserted house. The residents, including two children, had been killed when a bolt of lightning struck the house years ago. A 12-year-old local girl is forced to take shelter in the ruins after being caught in a downpour on her way back from the bazaar. As the afternoon fades into the evening, the two younger siblings, a boy and a girl, are set out in the rain to look for their elder sister. The older sister doesn’t know that her younger siblings are in the ruins and they don’t know she is there. With thumping hearts, the soaked children count seconds, trying not to be alarmed by the howl of the wind, the groan of the oak that has spread roots in the ruins, and the sounds made by a wild cat and an owl that have also moved into the derelict structure. Then as lightning occasionally illuminates the dark interiors of the ruins, the children see ghostly figures of other children. Are they seeing each other, or do they have company?

National award-winning director V.K. Prakash who has directed the story says, “Ruskin Bond short stories have always been fascinating. Each story creates its own little world of fantasy. The idea to adapt these stories on screen is what drew me towards the project. It was a wonderful experience creating Ruskin Bond's world on screen, shooting in cold, scenic hill stations. Plus, the added benefit of it being on a huge platform such as ZEE5 would ensure its vast reach. Banijay Productions has been doing some very good work off late and without their support and passion towards this project, it would have not been possible to achieve the results we have achieved.”

Actor Manav Vij said, “Working for ZEE5 and Banijay’s upcoming Ruskin Bond series has been an amazing experience. I always had this fascination with Ruskin bond stories as a child and considering it is my launch into the web space, I was looking for a character this unique. Thank you to ZEE5 and Banijay for bringing this opportunity to me. While shooting with them, I only wished this short story was longer and didn’t finish so early. Looking forward to work with them again. All the best for the show.”

With over 3500 films, 500+ TV shows, 4000+ music videos, 35+ theatre plays and 90+ LIVE TV Channels across 12 languages, ZEE5 truly presents a blend of unrivalled content offering for its viewers across the nation. With ZEE5, the global content of Zindagi as a brand, which was widely appreciated across the country, has also been brought back for its loyal viewers.

Zee Entertainment Enterprises Ltd. (ZEE) is a worldwide media brand offering entertainment content to diverse audiences. With a presence in over 173 countries and a reach of more than 1.4 billion people around the globe, ZEEL is among the largest global content companies across genres, languages, and platforms.

ZEE is present across broadcasting, movies, music, digital, live entertainment and theatre businesses, both within India and overseas. ZEE has more than 250,000 hours of television content and houses the world’s largest Hindi film library with rights to more than 4,200 movie titles across various languages. ZEE has also produced several movies for theatrical release and is the fastest growing music label in India.

More information about ZEE and its businesses is available on www.zeeentertainment.com