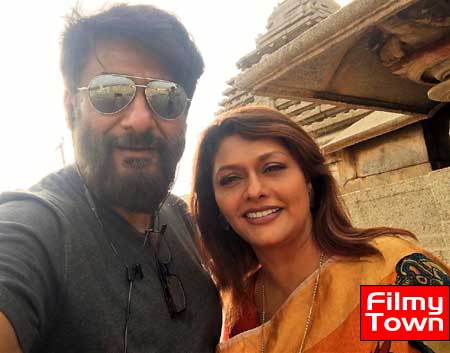 https://www.youtube.com/watch?v=C9WZVG3dDDM
In the spirit of Republic Day celebrations, Bharat Ki Baat the newly launched show on News18 India has launched its eponymous title track Bharat Ki Baat. Anchored by household name Pallavi Joshi and directed by Vivek Agnihotri, the show is a positive narrative on India's glorious past, ever developing present and a positive outlook into her future. The song is composed by noted music composer Shantanu Moitra and sung by the legendary Sonu Nigam. The multifaceted lyricist, Swanand Kirire has penned the lyrics. The track has garnered fair amount of views on youtube and only increasing.
“Bharat Ki Baat” opens with a heart touching soft yet penetrating melody which reaches a crescendo and cascades into a high octane, foot tapping number. The contrast in the prelude and rest of the song pretty much captures the essence of the show- unity in diversity which forms an integral part of Indian culture for ages.  The song also urges citizens to take conginsence of Indias glorious past, the rapid paceced development its making and the immense potential that lies ahead. It is a positive view point and clearly a very different narrative from the usual grim picture of the country that is always showcased on various forms of media.
The song is supported by a video from the show. In quick cuts takes a 360 degree tour of the country – landscapes to livelihoods, culture to history and most importantly India’s people and a slice of life. A radiant Pallavi Joshi emerges on a Shikara taking the viewers through a confluence of culture, ancient history, pinnacle of politics and rapidly advancing technology. Laced with Sonu Nigam’s voice and quick cuts of a vast repertoire of contrasting visuals Bharat Ki Baat has a feel good impact on viewers.

Bollywood films reviews and more at www.filmytown.com
Talking about the show and the song director Vivek Agnihotri stated, “We left no stone unturned to capture all the facets about the country. You will see flora fauna, mountains and deserts, a wide array of livelihoods- agriculture, fishing to hustle bustle of city life. We take you through the muddy alleys of villages and the parliament area of New Delhi. It captures tubes to trams, ancient monuments to Sardar Vallabh bhai Patel’s statue.  But above all it shows people who are as diverse as the terrain of this country and how they coexist in their day to day lives. India is a great country and the spirit of nationalism must be an everyday affair”.
Adding to VIvek’s point of view, Pallavi Joshi, the anchor of the show stated, “It has been a very difficult shoot. We have travelled through the length and breadth of the country to capture interesting shots, interviewing people and sometimes just researching.  We always focus on negative aspects especially when it comes to mass media- films, television, news even something as frivolous as gossips- call it morbid curiosity. How about turning your attention to something positive for a change?  Will it not give us more confidence and empower us to do even better?  “
The 26-part show will also feature important personalities who have made a significant difference in the past. It will also showcase the fusion of several customs and traditions that reflect the rich culture and heritage of the country while focusing on significant aspects like- health, education and infrastructure. The show will be telecast at 10am every Saturday and Sunday only on News18 India, along with News18 UP, News18 MP, News18 Punjab, News18 Rajasthan, News18 Bihar and News18 Urdu.