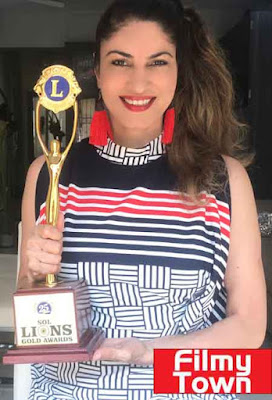 A multitalented Susheel Jangira has won Lions Gold Award as best debutante writer-director for her short film Meri Rockstar wali Jeans. Lions Gold Awards was a star studded Event where Bollywood Stars like Jahnavi Kapoor, Vicky Kaushal also received Awards. Sonu Nigam gave a fantastic performance while receiving his special Award, Sunil Grover was seen joking with the audience, everybody was in splits when he came on stage to receive his Award. Lions Gold Awards also honoured six Army Martyers who recently lost their lives, their families were given best support by the Lions Club President Raju Manwani. Priyanka Chopra’s Mother Madhu Chopra was invited on stage to support them. Amoungt all the different stars Susheel Jangira was very special first female actor in Bollywood who is a full fledged writer and director.
Susheel Jangira has been the face of popular Zoom TV shows like Planet Bollywood, Ring a star and other shows like fear factor-3,National Racing Championship, National Karting Championship,T-10 Gully Cricket ,Etc Chit-Chat ,Mountain Dew ‘Nidar’ .
Susheel has been writing a lot of poems, articles and short stories from her childhood. The writing passion and talent had supported her to contribute in her school and college magazine.  Her talent of unique writing has shown her way to write a this film which is thought provoking. According to her we have maximum male writers in Bollywood or Hollywood and even if and when they write Woman Oriented subjects they end up writing it from a male point of view, female view point and perceptive gets lost so at the end of it, all we see a woman protagonist thinking and behaving exactly how a man wants her to behave.Her thoughts are quite provoking as it has been proved with her first short film- Meri Rockstar Wali Jeans has been released on YouTube and installs became viral.

Bollywood films reviews and more at www.filmytown.com
The film Meri rockstar wali Jeans is a sensitive Hindi fiction film presented in a cinematic way. The film shows how the change in perception changes one’s life. The film is successful in depicting the message. Meri rockstar wali Jeans is a story of a girl Bhanoo, who is going through some past emotional and physical trauma in life.Mitali who voluntarily teaches chawl kids recognizes the pain of Bhanoo. She changes her life and motivates her towards her dreams. Bhanoo inspired by her teacher’s ripped jeans and proposed to be a rockstar. She understood whatever happened with her was not the end of her life, still he has a beautiful soul and she can achieve her dreams. Although the film is a short film but it occupies the audience till it ends. It emphasis on mental and emotional rehabilitation of the victim. As the end quotation in the film says “Life is all about New Dreams. Nothing should shatter you.”
Susheel Jangira is the lyricist, Writer, director & the producer of this short film. The film is presented by Secondoct Entertainment. Rohit Yewle is the DOP . music & background score is given by Rahul Jain and title song sung by Abhiruchi Singh. The Choreography is done by Gnyaneshwar Waghmare and edited by Milind Shriraam. Prior to its release the film has gather enough headlines. The Song received lot of appreciation and coverage in Media.
Susheel Jangira quoted “I am really excited to receive the award.This has boost up my confidence and I am looking forward for more such story and this will  also give confidence to budding writers and directors.Further she said about the film,  I wanted to touch base with the hardship and trauma in life that a woman of any age might go through. But the focus shouldn’t be the trauma rather her emotional and spiritual rehabilitation. She should be able to gather herself to come up with a way out of it and not end up being in a dark corner. There should be someone to bring them in light from the world of darkness and let them live their dreams. We should show light, show New Dreams and give a pair of jeans to life where you can feel rocking- This is how I see life and my film reflects my mindset”.