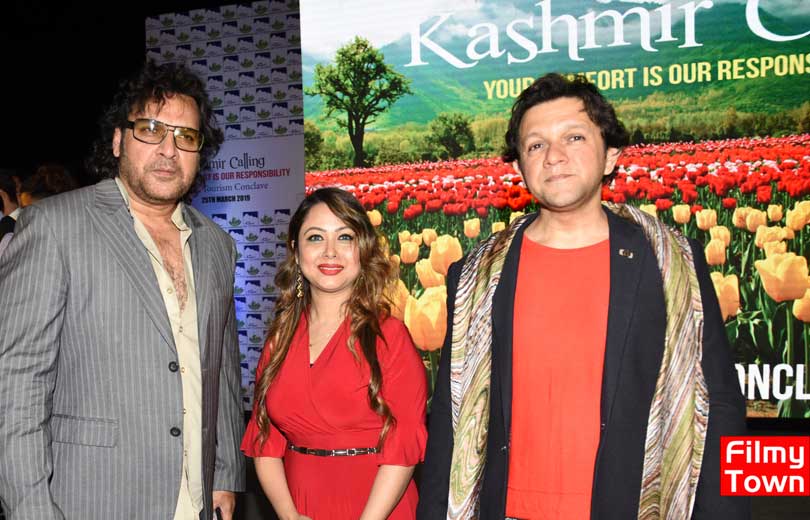 Advisor to Hon’ble Governor J&K Mr. Khurshid A Ganai said "We recently met in  Taj Vivanta at Srinagar under the chairman ship of Mushtaq A. Chaya Chairman , J & K Hoteliers Club & also the secretory. The kind of media publicity that Kashmir Tourism got on Kashmir situation it was felt that we need to come & interact with the state holders of rest of the country & particularly starting with Mumbai & the surrounding areas because that is where we receive the maximum tourist. Jammu & Kashmir, in particular Kashmir & Ladakh attracts the maximum tourist from all around the world. The Govt will do & has always been doing for their people , for example we organize Amarnath Yatra  in Kashmir which again attracts alot of people  from India. As you know the common people of Kashmir are peace loving, they want the tourist to be extremely comfortable, we want tourist to come & be our guests.  We will do everything, whatever is possible for us to do that you are comfortable & safe"

Sudhir Patil , President , Maharashtra Tour Operators association (MTOA) said "In Srinagar, Pulgaon, Sonmarg, Gulmarg & including Katra, Jammu & another breaking news is happening this year is introduction of  cable car at patnitop which is staring around 16th or 20th April, 2019 which is in collaboration with European partners. This as a result will flourish Jammu & Kashmir Tourism. Thank you for coming all the way & thank you for sharing, associated with Maharashtra Tour Operators association we have a long bonding.

J&K and Maharashtra have traditionally been very connected with each other as far as the tourism industry is concerned.

J&K has the privilege of receiving the highest number of travellers from the State of Maharashtra.

J&K, which is number one tourism destination as for as its pristine beauty is concerned, enjoys full support from the people of Maharashtra and also by its Bollywood filmmakers for long.

It is in the light of the love shown by the people of Maharashtra that the Department of Tourism J&K Government along with the travel and hospitality sector of the State conduct road shows throughout the country, attended Travel Marts in the cities like Mumbai, Pune and Nagpur to strengthen this bond further.

The sensuous beauty of Kashmir has attracted hundreds of filmmakers and the iconic films the Bollywood industry has ever produced since 1960s.

In order to rejuvenate the bond, a delegation of more than 40 members from the travel and hospitality sector of the State of J&K participated in the J&K Tourism Conclave which was inaugurated by Advisor to Hon’ble Governor J&K Mr. Khurshid A Ganai here in the evening.

More than 200 travel agents/tour operator/destination management companies/tourism promoters from Maharashtra and Gujarat participated in the event to show their support for the tourism sector of the J&K State.

J&K State “The Crown of India” continues to be the country’s pride and is famous for its hospitality.

According to a recent report by Government of India, J&K is the safest State in the country for traveller’s especially female solo travellers.

The recent report by the Ministry of Home Affairs (MHA) Government of India, there has not been a single incident of crime against tourists, including females, in Jammu and Kashmir.

Another report by the National Crime Records Bureau (NCRB), which says, not a single crime was committed against tourists who visited Jammu and Kashmir.

Both Ministry of Home Affairs (MHA) Govt. of India and National Crime Records Bureau (NCRB) reports have not only made state proud but whole country, which has become a benchmark and a milestone for others states to follow.

Unfortunately, the State of J&K has become a victim of negative propaganda, which can be countered by the support of all media houses/channels to create the positive perception about J&K State as whole and Kashmir in particular.

Scores of the solo woman travellers including others travelling in family and groups have visited Kashmir and they have been freely enjoying their holidays and have also minced no bones about describing the safety and rich hospitality of the people of the J&K State.

Currently, we are receiving a huge number of travellers from within and outside the country enjoying the unmatched beauty of the State.

We appeal you to portray thousands of positive stories that emerge from people and tourists visiting the J&K State and make it one of the preferred tourist destinations of the country. In the larger National Interest, tourism has to continue and this is the only way out to bridge the gap between different cultures and religions which will strengthen the National Integration.
Labels: Imran Khan J & K Tourism Kashmir Conclave Khurshid A Ganai Muzamil Ibrahim