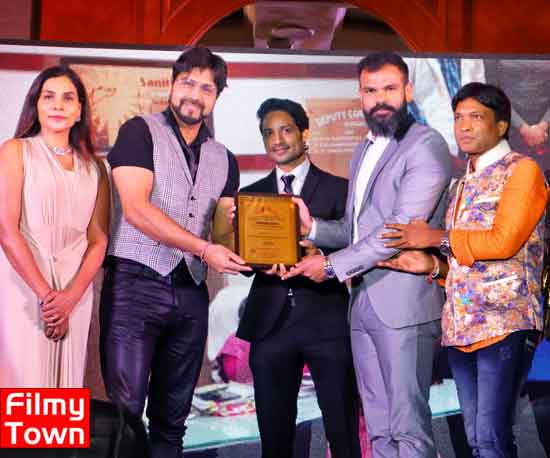 Film director Sam Khan short film “Seventh” has received an inspiring film of the year award  at Dadasaheb Phalke International Film Festival 2019. Businessman and director Sam Khan was the special guest of the award ceremony held recently in Mumbai. Seventh is the story of Sufi and a cockroach. On a gloomy night Sufi comes back to his building but got stuck in the lift with a cockroach. Beneath the surface of his life Sufi is hiding a secret either from himself or from someone else. Could his fight for survival become a night of reckoning or this night will be the end of him. The communication between a human and cockroach is crux of the film and this shows the creativity of the director. The film shows that how a passionate person survives despite of the circumstances. How a cockroach does not die after several attempts to kill it, in the same way, if a human wants to survive, he will find a way for it.

After receiving the award Sam Khan interacted with media and excitedly  share his feelings.It’s a huge pleasurable and proud moment for us as our work for Seventh has been recognized and felicitated with such a prestigious award.He said hard work pays off.The passion towards film industry has made it  possible for Dadasaheb Phalke award.   Dadasaheb Phalke International Film Festival , only the name is enough to know that we are contributing to the industry. On being asked about the movie, he said Seventh has a new concept in the genre of short film. The conversation between a cockroach and a human being is really interesting and looking forward to it. This movie shows how a circumstance changes a human being, that he bounds to share his thoughts with insects that neither can understand his feelings nor can do anything. When asked about the concept he said, this is inspired by a true incident. At the time of Balasaheb Thackeray’s death, one of his friends got stuck in a lift of an under constructed building for 6 days without any food or electricity. He further said they are passionate towards cinema. For making good movie, only courage and passion is required.I am looking forward for such work and recognition in further future.

Under the banner of Mother’s eye production Pvt ltd. Seventh is written and directed by Sam Khan. Actor and fitness icon Sahil Khan is the producer of the film. Nighat Malik, Lalita Devi and Mahashweta Singh are the co-producer of the film. The cinematography done by Adikesh Bhargava. Music and background score is given by Manoj Negi and edited by Ajay Verma.The shooting has been completed in Mumbai and is ready to release after monsoon on digital platform.