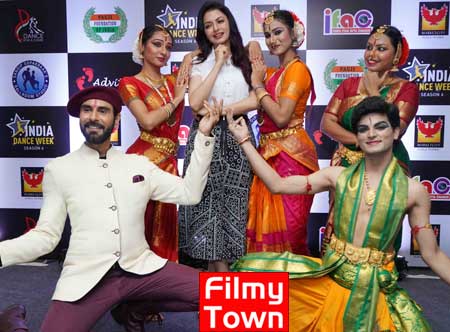 Sandip Soparrkar hosted a press conference to announce dance associates, NGO tie ups and to unveil the trophy of India Fine Arts Council presents “India Dance Week - Dance for a Cause" season 6. Maine Pyar Kiya Actress Bhagyashree and Sandip Soparrkar came together to unveil the trophy of the dance festival which is in its 6th year now at Atrium 6 of Phoenix Market city, Kurla.
“India Dance Week - Dance for a Cause” is the first ever two day dance festival celebrated on International Dance Day in India (27-28th April), where varied dance forms be it Indian or International classical, Indian or international folk, Ballroom, Bollywood, Hip Hop or contemporary all come together on one single platform. Soparrkar announced that this year for the day one “India dance Week - Dance for a Cause” comes forward in support of the Indian Army and announced their association with The Fauji Foundation of India. Capt. Prasoon Kumar CEO of Fauji Foundation of India was personally present to talk about their association with this unique festival with a heart.

The day two will be a mega all
India competition where participants from different parts of the country will come together and will perform variety of dance style and will also support the differently abled individuals from the Advitya Foundation.

Sandip Soparrkar personally hosted the introduction ceremony of this one of its kind dance fest at Phoenix Marketcity, Kurla which was attended by the who is who from the field of dance. The evening started with enthusiastic Indian classical dance performances from Uma Rele’s Nalanda Nritya Kala Mahavidyalaya followed by ballerinas from Villoo Bharucha’s School of Ballet. Brian Fernandes’ troupe performed hip hop and street dances and Folk dancers from Shreyas Desai’s Myriad Arts  displayed varied folk dances and Sandip Soparrkar’s Ballroom Studio presented some Classic Ballroom dances.

Speaking on the occasion the excited choreographer Sandip Soparrkar said, “I am so overwhelmed that Bhagyashree agreed to come and unveil the trophy of India Dance week - Dance for a Cause season 6 and I also would like to thank Phoenix market city Kurla for yet again associating with our festival. This year the festival will be a visual treat, so don’t forget to be a part of it.”
Labels: Bhagyashree bollywood India Dance Week Sandip Soparrkar Season 6