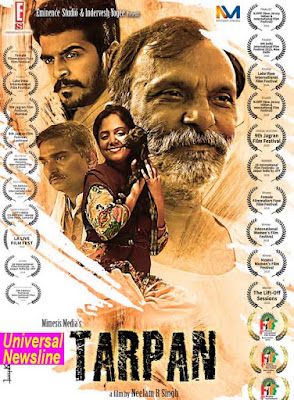 The film deals with the sensitive topic of friction between the upper class and the dalits of the hinterland of India. Finally it is the victory of a lower caste who avenges years of atrocities of the upper caste meted out towards his kin and his society.

Independent filmmakers are the rebels of mainstream cinema because they fight for the betterment of cinema within the country therefore small budget independent film are a responsibility rather than just filmmaking.

This film however doesn't matches the benchmark but for being a debut film of a rookie filmmaker it is almost a fine piece of work only because of subtle writing and strong narrative.

All the actors in the film seem focused and hardworking and honesty in their acting is the beauty of the film.

Neelam is a smart director who shot the film with whatever she knew of filmmaking and she too did it honestly.

Though for an indie film, it completely lacks creative direction, metaphoric frames, lightwork and cinematic narrative.

Indie filmmaking is like a movement in the country and so its flag bearers have to be more than average, if they actually want to uplift the condition of cinema in their country.

Unfortunately this film is just a good film like all the other films in the country and not a rebellious piece of art work.

While watching the film I read the name of Ashok Purang in the credits as creative head. However I din't actually felt his acquaintance with the film.
Phew! maybe I am a man of high expectations.
Labels: hindi movie neelam r singh. review tarpan