Achyut Palav to conduct a Devnagari Masterclass in USA 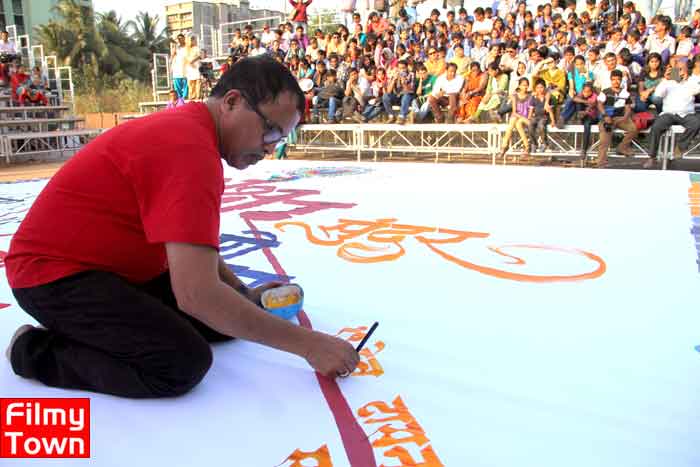 The renowned calligrapher, Achyut Palav has been invited to conduct a special workshop and a Masterclass during the 6th Calligraphies in Conversation. This International Calligraphy Exhibition is being held in San Francisco. The opening ceremony will be held on 7th June 2019 and the event will showcase works of eminent calligraphers from around the world. Achyut Palav’s Calligraphy Demonstration will be a part of this opening ceremony. Paintings of selected calligraphers will be displayed in the ‘Master’s Section’. A special Masterclass by Achyut Palav is organized on 12th June where he will present various styles of Indian Calligraphy. This session is an opportunity to observe the way American Calligraphers perceive Indian Calligraphy and their attempt at learning Devnagari script from an artist’s point of view.
Latest Hindi film reviews at: www.filmytown.com
Apart from America, his paintings will also be exhibited in the 11th World Calligraphy Biennale (S. Korea) in September 2019. He has always been proud of his Indian Heritage and an enthusiast of the Marathi culture and literature. He is known for his unique style and experiments in calligraphy. This year he has chosen the line from Sant Tukaram’s Abhang ‘Anadache Dohi Ananda Taranga’ as a base for his painting in America while his paintings displayed in S. Korea use the lines ‘Vasudhaiva Kutumbakam’ and ‘Jyotine Tejachi Aarati’.
He strives to bring forth the beauty of Marathi Language and Indian Calligraphy before the world with his remarkable creations. Two years ago, he was one of the 6 calligraphers chosen from around the world for a prestigious project in Paris. He used lines from works of noted poets and saints like Sant Dnyaneshwar, Sant Tukaram, Bahinabai, N. D. Mahanor, Mangesh Padgaonkar and many others to show the superiority of Marathi language and literature.
Along with paintings of Achyut Palav, works of his students will also be displayed in the Digital Section of the upcoming exhibition in San Francisco. He expresses his pleasure regarding the growing popularity of Indian calligraphy and especially the calligraphy in Marathi language in the world.
Labels: Achyut Palav Calligrapher Devnagari Masterclass USA