Mumbai, 18th May 2019 :
After getting the hails for the content & strong story, the music of the film Nakkash launched by the legendary Ghazal singer Padma Shri Pankaj Udhas. The Director Zaigham Imam, producers Pawan Tiwari, Govind Goyal, actors Inaamulhaq, Sharib Hashmi & Kumud Mishra were present along with a lot more well known face of the industry at the event. 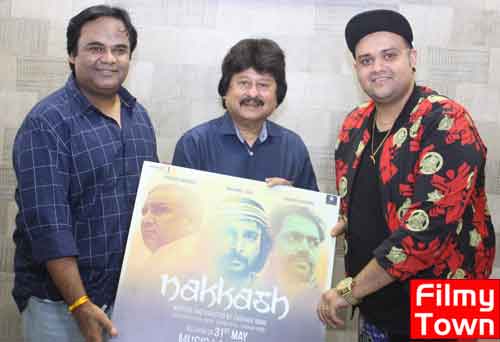 Pankaj Udhas praised the main title song ‘Wo daur dikha jisme Insaan ki khushboo ho, Insaan ki sanso main Imaan ki khushboo ho’ of Nakkash and said that such songs have the essence of the soil and they bring people together. That is why such songs are very important to make in present times. He also praised the lyricist /poet of the song and said that his writings always encourage humanity.

The teaser of this song is being highly appreciated on social media. Talking to the media, Alok Srivastava said ‘When I wrote this ghazal, it surely felt that it should get a big platform and it happened through Nakkash. Nakkash is the film woven with the threads of the social concerns and it gives me immense pleasure that my song perfectly fits it. People can feel humane through this song, which is sung by the purest souls we can have, the children.’

The music director Aman Pant said that the lyrics are very powerful and we had to think a lot over it, ultimately the idea of making it into a children prayer came to us. And the experiment was quite successful. Zaigham Imam, the director of the Nakkash, said that he first saw the initial lines of the song on Alok Srivastava's Twitter Handle, since then it was in his mind and was matter of time that it was included in his film. Nakkash is being released in theaters on May 31, 2019.