Mumbai, 20th July 2019:  After getting critically acclaimed upon it’s release nationwide, Nakkash is ready to re-visit India on the popular demand with the 10th edition of Jagran Film Festival. Jff 2019 is all set to travel in India with their massive expected attendance of 55,000 people in 18 cities for more than 400 screening of most critically acclaimed films from around the world. Nakkash, Bulbul Can Sing, Hiroshima Carptheatre, Widows of Vrindavan, The Irish Prisoner are some of the gems among the list. Nakkash is directed by Zaigham Imam and produced by Pawan Tiwari, Govind Goyal and Zaigham imam. 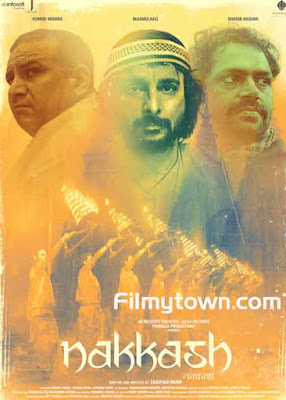 Nakkash, which was released in the last week of May this year, got excellent reviews from the critics and audience. Nakkash has the finest blend of commercial and off-beat cinema which attracts a lot of people. The team decided to show it in this festival because they know that the audience all over India is still craving to watch films like Nakkash, which have a perfect fusion of social message & the cinematic storytelling at its best as that is a rare phenomenon in the cinema. The people are also appreciative that such subjects are still dealt with through the craft of the filmmaking.
More Bollywood news and film reviews at: www.filmytown.com

The film depicts the scenario of Varanasi by portraying the character of a Muslim craftsman, Alla Rakha Siddiqui, engraving Hindu Gods in the temples of the city. All the characters in the film are from both the communities and the conclusion puts the audience in the awe, which compels people to think about the certain aspects of the Indian society and questions the basic contrast between religions.
Nakkash has a comeback of the trio of Inaamulhaq, Sharib Hashmi & Kumuds Mishra from the critically acclaimed film ‘Filmistaan’. The performances of all the actors are getting appreciated and Inaamulhaq, who plays the role of Nakkash Alla Rakha, also won ‘The Best Actor Award’ in the Washington D.C. South Asian Film Festival last year.

The writer-director Zaigham Imam said ‘Nakkash represents the soul of India. My friends advised me not to go ahead for a film on such a complicated & delicate subject as it is very challenging to handle decorously. I had to manage the balance between the strong language and even stronger message of the film as it could go haywire on so many levels but I think we dealt with it quite well.’

‘If a film fulfils its responsibility of conveying a positive social message, then it is truly successful. The success, in getting through the message of the film across, tells us that this is high time that we can actually talk about such things in open and get some good Cinema on such offbeat topics too.’ added Zaigham.
Labels: Bollywood film Govind Goya Nakkash Pawan Tiwari Zaigham Iman