Dheeraj Kumar celebrates his birthday with his staff 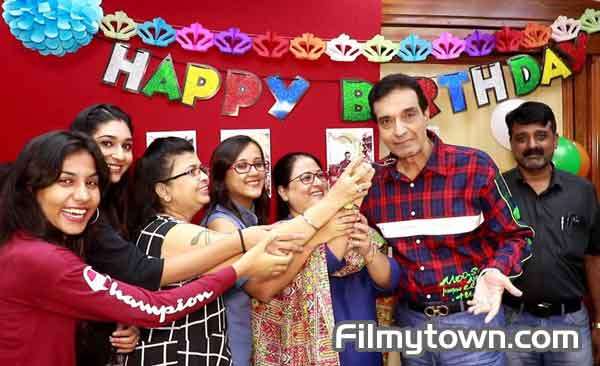 The actor, producer, director celebrated his birthday at his Creative Eye Limited office. The entire team comprising of Producer Sunil Gupta , head of film and television Sandhya Riaz, project head Ajju Asghar Ali , personal secretary Suvarna Deolekar, casting  director  Prashant Joshi, Studio Head Bakshi and the entire office gave a pleasant surprise when Dheeraj Kumar walked into the office.
The entire office was decorated with colorful balloons. It had a festive look and on the dotted time of 5 PM as the staff had decided to celebrate his birthday. He was invited to cut a sumptuous Chocolate cake with a meaningful quote on the cake.
After the cake cutting ceremony everybody congratulated him for turning 74. Dheeraj Kumar just smiled and laughed after hearing his age . On this Sunil Gupta said for our sir age is just a number which was dittoed by Sandhya Riaz and others .On this occasion Dheeraj said Creative Eye was initiated in the year 1985 .from there long journey till 2019 the company have created more then 14 thousands hours of programming .

He emphasized ,the journey is complete when the other pillars are with you , who are contributing from their end for the success of the company .
On his birthday he praised his colleagues, staff and other members present. The company is marching a head gloriously and going to create number of web series in time to come creative eye shall keep on doing everything with changing of time that is required for the company. Subsequently everybody had a sumptuous chocolate cakes, soft drinks and enjoyed the party with lots of masti, hungama, singing together which went on almost for two to three hours.
In the end Dheeraj said that we all have to dreams with our eye open to touch those dizzy heights which is yet to be achieved by the company .
Labels: Bakshi birthday celebration Eheeraj Kumar Prashant joshi Sandhya Riaz Suvarna Deolekar