Get ready to witness the drama unfold as ALTBalaji and ZEE5's Kehne Ko Humsafar Hain launches its third season today! 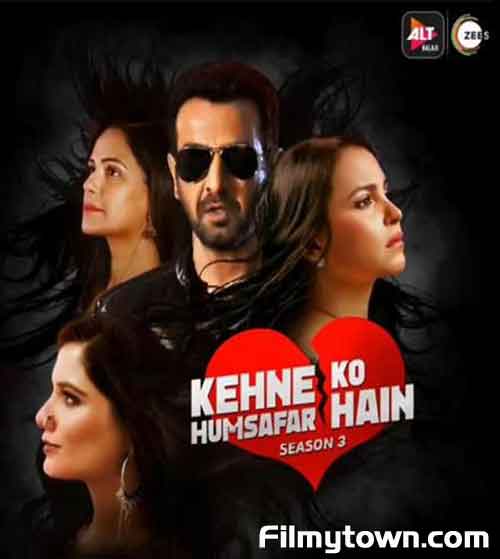 Making the audience experience heightened emotional relatability, ALTBalaji and ZEE5's most successful and celebrated series Kehne Ko Humsafar Hai, over the last two seasons, depicted the dynamics of a complex relationship, aspirations of a liberal woman and life after divorce.

With unprecedented views, audience appreciation and critical acclaim all across the globe, the first two seasons of Kehne Ko Humsafar Hai went on to break records resulting in becoming the most-loved show on the platform with an 8.8 rating on IMDb. The first two seasons saw increasing fandom amongst viewers, the time has now come to embark on a new journey and take this ever-popular show to new heights as ALTBalaji and ZEE5 launch the third season of Kehne Ko Humsafar Hain.

The wait is finally over as 10 of the 18 episodes are now streaming on both ALTBalaji and ZEE5 apps. Challenging the societal norms of marriage, relationships, and love, the series features a talented pool of actors like Ronit Roy, Gurdip Kohli Punjj, Mona Singh, Apurva Agnihotri, Pooja Banerjee, Palak Jain, Anjum Fakih, Sayush Nayyar, Sharon Prabhakar, Suchitra Pillai and Aditi Vasudeva amongst others.

The story starts with the changes in the lives of the protagonists after a leap of 4 years. Ananya (Mona Singh) is now a successful businesswoman and a mother and now has become hurricane Ana who lives on the edge. Poonam (Gurdip Kohli) on the other hand, has moved on and is leading a happy married life with Abhimanyu. Rohit (Ronit Roy) has had his heart broken and has become carefree, with no responsibilities in life. With nothing to lose and care about, he is trying to bring calm to his life by either going on bike rides or getting into mindless relations with younger women. With Nisha (Anjum Fakih) and Amaira (Aditi Vasudeva) making an entry in Rohit’s life, one might think Rohit is enjoying his latest romance to the fullest but his past makes him unable to accept the reality that Poonam and Ananya are no longer a part of his life.

The series also showcases the emotional trauma that Rohit's daughters go through due to his reckless behavior. Bani and Nikki, daughters of Rohit and Poonam, had faced a lot of trouble and hardships in life due to their parent’s failed marriage and just wanted things to get back to normal. And the chaos doesn’t just end here in the show as Rohit has some eventful encounters with Ananya's and Poonam's husbands. Bani on the other hand is facing her own problems. At one point in her life she hated Ananya for being the other woman in her mother’s life and today she’s repeating Ana’s mistakes. While marriage happened easy for Bani, love has become complicated for her and her relationship is a secret

Speaking about the show, veteran actor Ronit Bose Roy, who essays the role of Rohit Mehra in Kehne Ko Humsafar Hain season 3, shared, “It is overwhelming to see the kind of response both the seasons have received and as we move towards season 3, things just seem to be getting better and better. I really enjoyed playing the completely new Rohit who has now become a reckless man and is in the lowest phase of his life. I hope you guys have as much fun as we had while shooting it. You don’t want to miss this one for sure”

Gurdip Kohli further quipped, “In this season, viewers will get to see a new Poonam and her many shades. With an already-failed marriage and after getting remarried to a much younger person, there is still a sense of insecurity that hounds her. It gives me immense joy to be a part of season 3 of Kehne Ko Humsafar Hain as I now get to bring a different facet of Poonam’s personality to the audience.”

The third season of Kehne ko Humsafar hai also marks the conclusion to this story as the production house has already started writing the script for a fresh fourth season which revolves around a star-wife's extra-marital affair.

With a fourth season of the popular series already in the pipeline, the upcoming season is sure to be an exciting watch as one waits to see if Amaira becomes the latest Humsafar in Rohit’s life or does he realize how much he loves Ananya! To find out,