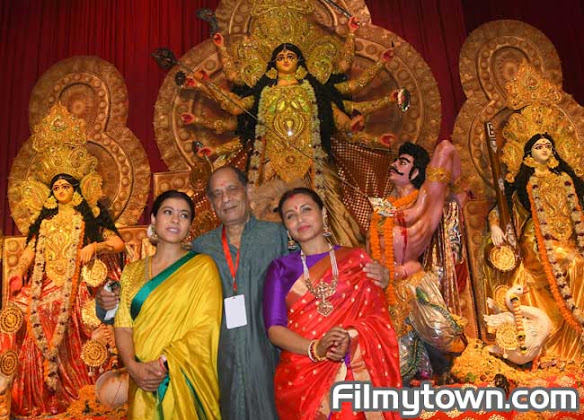 North Bombay Sarbojanin Durga Puja Samiti will have a live broadcast of Durga Puja from Panchami to Dashami Visarjan on their website http://www.nbsdp.com

https://t.jio/nbsdp -  Jio Link can be put on any channel to add the livefeed

As the festival of Maa Durga is approaching, the members of North Bombay Sarbojanin Durga Puja Samiti are all set to go the virtual way amid the Covid-19 pandemic.

The members have decided to take their puja to the people through live streaming and social media through cell phones and laptops. They are concerned that with crowded pandals many may get infected by the deadly virus.

Infact this year they have scaled down the idol from 25ft to 4ft. The venue has been shifted to a small hall in Santa Cruz. Elder members are requested to stay home. Infact members are allowed to visit the pandal in small batches adhering to social distancing norms. Unfortunately outsiders, bhog, prasad and flowers are strictly prohibited to avoid physical contact. There will be two hours of morning anjali without flowers and two hours of sandhya aarti.

Deb Mukherjee says “We organise the festival for hundreds and thousands of devotees across India every year, however the celebration will be virtual this time. We seek the blessing of Maa Durga to help us in these tough times. We are happy to reach millions of people through our virtual celebration. We have set certain rules which are mandatory for every member who will visit the pandal to follow"

Durga Puja is celebrated from Shasti to Bijoya Dashami

MAHASHASHTI: On this day,  Maa is welcomed with much fan fare. In the evening ,the Kulo is decorated with Paan, Sindur, Alta, Sheela (stone) , Dhaan etc..and amidst the beats of Dhaak and sound of Shaankh, Maa is welcomed...  This is called Amontron and Adhivas -Maa's Bodhon...Maa is being welcomed.

MAHASAPTAMI: On  this  day  the   Kalash (Earthen Pot) is  placed  with  a  green Coconut  and  Mango  Leaves .  This is surrounded on all sides by a red thread and tied. This is called KALASH STHAPAN. The Kalash is an earthen Pot because Maa's Murti is made of Ganga clay and Maa's PRAAN (or life) is concentrated in the Pot. So the Pot is the symbol of Maa.  The  Puja  starts  with  praying  to  Ganapati  ,  followed  by  prayers  to  Maa.  Another name of Maa Durga is NABA PATRIKA, which means nine trees i.e.Banana tree, Kochu tree, Haldi tree, Jayanti tree, Branch of Bel tree, Dalim tree ( pomegranate) are tied together. The double Bel fruit is tied to the Banana tree. This is then taken to a river bank or sea and given a bath. When it is brought back it is drapped in a white and red sari with sindur and it now looks like a married lady with her head covered. This is called KOLA BAHU. Many have a misconception that KOLA BAHU is wife of Ganapati but actually she is MaaDurga or Naba Patrika.. Ganapati's mother

MAHA SNAN: On this day Maa Durga is given a bath. First a vessel is  placed  in front of the Murti; a mirror is kept in the vessel, so that the reflection of Maa is seen in the mirror. The   Priest applies Haldi and Mustard oil on the mirror, as though they are applying it on Maa before the bath. In earlier times  when there was no soap, haldi and mustard oil were used for  having bath. The Pujari puts different kinds of water, i.e. Coconut water, Chandan, Ganga jal, Sugar cane juice, water from seven holy seas to give her bath. During this time, mud from every region, as well as mud from Prostitute’s door is very essential. After bath the Pujari puts dhaan- durba and new sari with Maa’s name written on  the mirror which is then placed on the Bedi (the place of worship).

PRAN PRATISTHA: This  means bringing life into the mirror.  The Pujari takes Kusha and flowers in the right hand, and touches Maa from head to foot and with Mantra Path life is brought into the Murti, Mirror and Kalash.

MAHA AGAMAN: Every year Maa comes either on a Palki or an Elephant or a Boat or a Dola (Swing) , or a Horse etc.
This Bengali year 1423, Goddess Durga's arrival on a horse significes, indicates the "bad horse"- The most destructive mood, hence all her path is trampled. The Goddess arrives & leaves the earth on the same vehicle, indicating natural calamities, social unrest and political
upheavals. Maa Durga's agaman- is on the horse & gaman - on a horse.

MAHA ASHTAMI PUJA: Maa is now Maha Gauri- The Puja starts with Mahasnan & Maha gauri puja. The Puja is done to give Maa the strength of the 64 Yoginis. This is a Puja of 9 pots.Then the weapons of Maa are worshiped.

SHANDHI PUJA : This is the puja when Ashtami Puja ends and Navami Puja begins,so the name Shandhi puja. This is considered to be the most vital time, meeting (shandhi)of Ashtami and Navami  puja. The duration of this Puja is 45 minutes. At this moment  Maa is CHAMUNDA.
Pushpanjali: Prayer offering. Bhog is offered which consists of fruits and sweets are offered to Maa, followed by  "NEET  BHOG" , consisting of  Rice, Ghee, Dal, Fried Vegetables, Chutney and Payesh.  This prasad  is later distributed amongst the devotees which is called KANGALI BHOJAN.


At this time 108 diyas are lit and 108 lotus are offered to Maa.
There is a famous story that Lord Ram prayed to Maa Durga offering 108 lotus at her feet in order to defeat Ravan. But to his surprise he found one lotus  missing , to replace it ,he wanted to sacrifice his eye and pray to Maa..at that moment Maa appeared in front of him and stopped him..returning the missing lotus to him.  She then blessed him for his " VICTORY".

MAHA NAVAMI PUJA : On this day, Maa is SIDDHI DHATRI. This Puja starts with  Ganapati Puja and then puja of all the other DEV and DEVIS are performed..followed by Maha Snan of Maa.

BIJOYA DASHAMI:- On this day Maa had defeated and killed Mahishashur.

DEVI PUJA:- Bhog with curd, honey and milk is offered to Maa.. this is called CHARANAMRIT. The pujari sitting on the Asan takes a flower near the sacred pot and keeps it in the Northern direction because Maa is from KAILASH.


Then the  pujari takes the sacred mirror which was on the vessel and performs the ritual of Visharjan. This is the same mirror which was used to welcome Maa because her reflection is on the mirror .

VISHARJAN:- During the Visharjan of the Murti, all the devotees either go to a river bank or sea and immerse the Murti in the water.

SHANTI JAL: - The sacred pot is brought back from the river/sea filled with the water where the Murti is immersed. Then the pujari chants the Mantra and sprinkles water with the help of mango leaves on the head of all the devotees for peace and happiness.

DASSERA: This is the day of rejoicement, where youngsters touch the feet of their elders seeking their blessings and sweets are distributed. 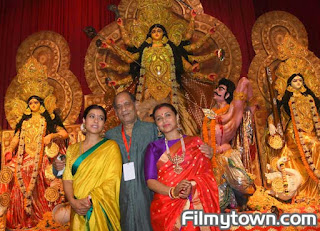