A gripping show on the Mumbai gang wars of the 90s, the bullets of the gangster saga Mum Bhai strike bulls-eye in the OTT space 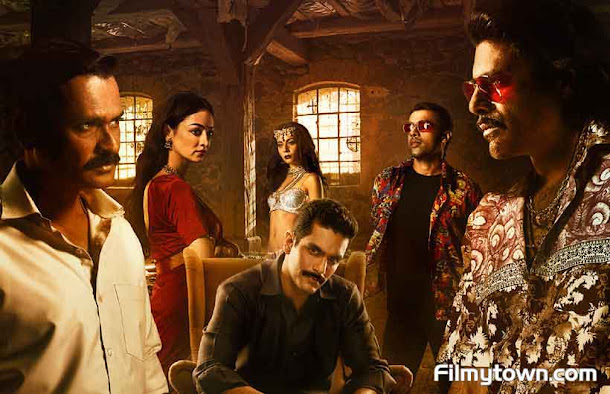 There are few genres when it comes to movies and web series, that bring in the same level of excitement and anticipation as the one of a gangster drama. And with each one of us being extremely fascinated by the Mumbai underworld and its tales of epic cops and gruesome gangsters, ALTBalaji and ZEE5 apps have done a phenomenal job of showcasing the world of MUM BHAI to the netizens!

The masters of Indian OTT entertainment, with their latest offering Mum Bhai, have once again shown why they’re the undisputed dons of the homegrown streaming space. They’ve not only got the story and plot spot on but with two power-packed performances by Angad Bedi and Sikandar Kher, fans of the show couldn’t have asked for a better portrayal of a trigger-happy cop and a gangster who wants to rule over the city.

The frenetic pace of the show sinks you into its gripping narrative, making you not want to get up. Add to that, the realism of Mum Bhai comes from the setting, the get-up of not just the lead characters, but the ensemble cast as well. Sharad Kelkar's impactful voice as the ‘sutradhar’ of the show adds up to the intensity, giving Mum Bhai a masaledaar vibe!

The actors have mastered the accent and character so well, that one gets the feeling that you’re not watching Angad and Sikandar, but a Bhaskar and Rama Shetty on screen. While that certainly tells you about the larger-than-life persona that a popular cop and gangster can have, taking nothing away from the brilliant performances by the two talented actors.

What makes a show like Mum Bhai stand out is its brilliant characterization. While both the lead characters have their own goals in mind, what binds them together is that each one of them wants to rule over the city as the one and only Bhai.

Special credits go to the powerful ladies in the show. Sandeepa Dhar's character Vaishnavi is a charted accountant who nails the feminism chord. Madhurima Roy plays a vibrant Ranjana while Trishna Mukherjee's character Meera is so composed yet fierce.

It’s time to sit back and enjoy the tale of friends turning foes in this gripping tale of the Mumbai underworld. Made by the producers of Shootout at Lokhandwala and Once Upon a Time in Mumbai, the show touches upon the aspects of jail, power, money, politics, encounters, Mumbai, and Dubai in a never-seen-before manner to leave each one of us asking for more.

Speaking about the show’s launch, actor Angad Bedi comments, “It’s finally here. We’ve waited for this moment for a while now because we had started shooting just before the lockdown was announced. Everything came to a standstill. We finished 30 days of the shoot during the lockdown that saw every struggle and toil ready hard. I myself went through a series of injuries and rehab. It has been quite an emotional journey physically, as well as mentally it’s a show that’s action-oriented. When you put in so much of hard work you want to see fruits of labour. Today is the day and we all are excited as a team. I can vouch for my entire cast that we’ve put our best foot forward. Now the show belongs to the people, I pray and hope that all the efforts that we put in, our sweat, our blood is finally going to be watched by many people of this country as well as overseas. I look forward to all your blessings and good wishes..”

Commenting about the show’s launch, actor Sikandar Kher says, “We’re finally here. No more waiting. It’s time for the viewers to watch bullets flying and those cop and gangster chase sequences that they’ve been looking forward to. While the show has covered everything that a gangster drama should, the fact that it is an offering by ALTBalaji & ZEE5, promises a mass entertainer that people are going to remember for a very long time. With Rama being one of my most-challenging characters to date, I am proud of what I have put in front of the camera, and I hope that my fans and viewers love what we have got for them.”

Streaming on ALTBalaji and ZEE5 Premium, Mum Bhai is a crime drama that dives into the Mumbai underworld. The narrative revolves around the friendship between a cop and a criminal, set in the milieu of Mumbai’s underbelly from the late eighties to early 2000. Is there a season two, the fans can't wait to know the answer!